The new novel I’m working on, titled Carni, will be my first attempt at writing carnival horror, a sub-genre that includes killer clowns, freak shows, and tunnels of love leading straight to hell.

My story is set in South Jersey, specifically Burlington Island, 300 acres of wilderness wedged in between Jersey and PA on the Delaware River. The island has an interesting history that I’m using as a springboard for my creepy carnival story.

Called Matennecunk by the Lenape natives, the island became the location of New Jersey’s first recorded murder when two Dutchmen were slain by Lenape braves in 1671. No, my story will not include an “old Indian burial ground” filled with vengeful ghosts. I think that cliché has been done to death by now. That’s not to say I won’t be using established genre tropes because I always do. Creepy clown anyone? But I will be attempting, in my own way, to give them a fresh merry-go-round spin.

What inspired my story, besides the island itself, was that it was once the location of an amusement park called Island Beach. Judging by the old photos, it was quite a popular attraction. A fire in the 1920s ended the fun, however, and the island changed hands and purposes. It is currently owned by the state of New Jersey and is used for mining sand and gravel, thus the man-made lagoon at the island’s center. Clean-up efforts persist to this day, as do occasional exploration into the rusty relics of the island’s past lives. I’ve never set a foot on its banks, but I hope to soon. I want to absorb its essence for my story. I’ll probably absorb plenty of mosquito bites and Poison Ivy as well, but it’s all in a day’s work.

I begin my story with the fire at the carnival and who set it (all fictional). 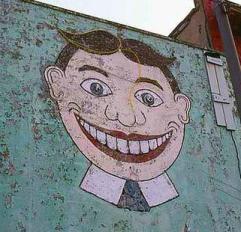 My villain is the Island Beach mascot called Carni, a killer clown inspired by Coney Island’s Steeplechase Jack—can’t tell me that grin isn’t creepy, and Alfundo, the Dorney Park mascot featured on this wonderful sign I remember from visiting Dorney as a kid. A fire in the mid-1980s destroyed most of Dorney’s original small-town charm, but the park is still there.

Creaky wooden rides erupting into sudden flames, roller coasters becoming derailed, creepy clowns with Glasgow grins, that persistent legend of the kid who lost his arm in the fun-house machinery—these are what adds those extra chills to the carnival thrills. As part of my story mapping, I’m not only recalling my own fond memories of being deliciously scared at carnivals and amusement parks, but I’m also revisiting some carnival-themed works like Dean Koontz’s The Fun House and classic horror films like Freaks and Carnival of Souls. From the unsettling strains of the calliope to the rough-trade roustabout who just might mess with the gears on that ride, there is always danger lurking within, and just outside, the midway’s colored lights. Isn’t it fun!

My latest video, adding to the discussion. 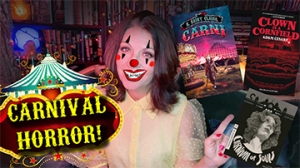 Processing…
Success! You're on the list.
Whoops! There was an error and we couldn't process your subscription. Please reload the page and try again.
Loading Comments...